If I were to ask you to conjure up a picture of a Dales resident what would that person look like?

Chances are we probably all thought of someone different, and it’s little wonder as the National Park is home to a wide variety of people of very different heritages.

And this has been the case for centuries. From the Anglo-Saxons and Scandinavian settlers, to the Romans, Vikings and Normans, and to more recent settlers from across the and further afield, the Dales has been a melting pot since 100 BC when the first outsiders, the Celts invaded from .

Some people have come by force, some to escape or find freedom, and others to enjoy the location or seek economic success.

October is UK Black History Month and we thought, with the help of the , we’d explore the people and places of the Dales that have been connected with Africa, the Caribbean and .

Where people have come from, where they moved to, why they came and why they went may come as a surprise!

For centuries, profits from transatlantic trading contributed to the development of the Western European economy, including that of the Dales. There was direct trade between and Africa, the West Indies and the .

Knitted stockings and ‘bump caps’ made in Dent were exported to the West Indies and sugar and other goods were imported to . There is evidence of servants - enslaved and free - who were seemingly brought here by people living in the Dales and surrounding areas.

Local people also travelled along the shipping routes. They filled various roles including ship’s surgeon, captain of a slaving vessel and slave trader.

Several Dales families owned plantations in the . Property names such as ‘Grenada House’ in Askrigg and what was known as ‘Africa House’ in Sedbergh provide tantalising clues to the history of their past owners.

Other people from the area worked in , , , and , in roles such as overseer, surveyor, millwright, doctor and book-keeper. George Metcalfe of Rigg House near Hawes was a sugar plantation owner and president of the counsel in , while William Hillary, born at Birkrigg near Hawes, moved to in 1747 to work on climate and disease. He wrote a tropical medicine book on his return.

The contribution that and enslaved Africans made to the wealth of certain Dales families must have been significant. For some, the inheritance of estate, property and trading interests raised both financial and ethical issues. of Spennithorne for example, became a planter in . , his son, “born of the body of a Slave of the name of Sherry Ellis on the Greencastle Estate in ” in 1823, was freed and came to in 1835, eventually inheriting his father’s property in 1844.

Moving to the Dales

Various records show that people were brought to the Dales and the surrounding area to work as servants or nurse-maids. 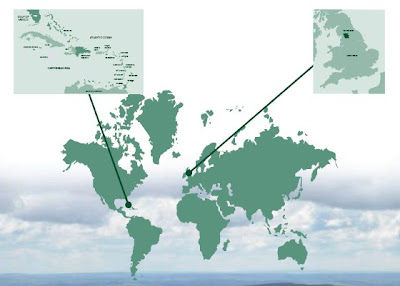 John Yorke, a “negro servant”, was baptised at in Swaledale and confirmed in . Yorke eventually married Hannah Barker at Kirkby Ravensworth and had seven children. It is interesting that in his book, ‘Richmondshire (1908)’, Edmund Bogg describes two of the Yorke children as “negroes brought ... from Afric’s sunny clime” despite the fact that they were born and bred in Swaledale.

John Dalton Esquire (1726-1811), an army officer in the East India Company, also appears to have brought a servant to the Dales area. This man, York, may have been of Indian origin.

We also know that women were brought to the area as servants. William Findlay of Thorns Hall, Sedbergh, came back to the area with a servant known as ‘Black Jenny’ and the Robinson family of , near Topcliffe, Thirsk also employed a “malloto servant”.

There were many cotton mills in the Dales and area, all processing and generating income from a slave-produced product. Greenholme Cotton Mill at Burley-in-Wharfedale employed children from St. Margaret’s Workhouse, . A letter from the Mill dated 3 November 1797 requests more children, “we ... rely upon you ........ for sending healthy Children.... Sophia the Black Girl is greatly improved in her industry.”

Thomas Rutling was born into slavery in . He came to as a member of the Fisk Jubilee Singers, a group established to raise money for the building of a University for African-Americans, at a time when American universities were strictly for “Whites only”. Rutling eventually settled in in 1891, living there for at least 20 years. A linguist, he taught Italian, French and German in several local schools.

Children from the West Indies and the sons of rich Africans also attended school in the . In 1750, Francis Barber was sent to school in Barton near by Colonel Bathurst.

For some, the experience of living in other countries had a profound effect. On their return from the to the Dales, some individuals chose to stand against slavery and to support the right for freedom and respect. They gave evidence at the House of Commons enquiries into the slave trade. Others also chose to stand in support of the abolition of slavery.

On 7 April 1798, a newspaper reported “the collection of £18 for supporting the application to Parliament for repeal of the [slave] trade ‘raised by voluntary contributions in a small part of the high end of Wensleydale... The contributors (being chiefly farmers) were informed of the injustice and inhumanity of the slave trade by pamphlets circulated previous to the collection.”

Robert Boucher Nicholls, Dean of Middleham, was born in and together with several other Dales people, gave evidence in 1791 to the House of Commons Select Committee which was enquiring into the slave trade. In 1787 he wrote a letter of support to the Society for Effecting the Abolition of the Slave Trade, which they considered important enough to be printed. He was a supporter of the Cambridge-educated African Caribbean poet, Francis Williams.

Henry ‘Box’ Brown was an ex-slave who spoke in favour of emancipation and travelled throughout the north of . He is known to have spoken in Keighley and may have visited the Dales area.

The information uncovered about the Black history of the Dales by the and North Yorkshire County Council Record Office as part of our ‘Hidden History’ project in 2007 only revealed the tip of the iceberg.

There are many stories of enslaved Africans being brought to villages which as yet have no supporting archival evidence. There are families for whom we can find no modern day link and people that we have not yet discovered.

Can you help? Have you traced your family tree and discovered some ‘hidden history’. You could contribute to the research of the Museum by getting in contact and making sure we have a full picture of the history of the Dales and the many people that have helped shape it.
﻿﻿﻿ ﻿
Jenny Thornton was one of those people who got in touch. She’s a descendant of the enslaved African John Yorke. Mrs Thornton was eager to offer new information about her family history and was able to exchange research with Museum staff and add photographs of Yorke and her other descendants to the display.

Museum Manager said, “Suddenly, John Yorke went from being a name on a piece of paper to a living, breathing person with a very real and direct link to the present-day. That’s what’s so interesting about local history – the effects are all around you.”

Inspired by a new interest in her family history, Jenny went on BBC Radio 4’s programme “Tracing your roots” to talk about her family history. She even got to travel out to with another BBC series, “Who Am I?”, to find the tombstones of her family. “Who Am I?” was broadcast on BBC Local Radio and released as part of the BBC website’s UK Black podcast.

is open 10am to 5pm Monday to Sunday and tells the story of the people and the landscape of the Yorkshire Dales. There are regular special exhibitions and events throughout the year. www.yorkshiredales.org.uk/dcm

The ‘Hidden History’ and ‘Dales and the Wider World’ research is available to view in our research room, and we have volunteers on hand to help visitors explore the information on Mondays and Wednesdays.

Call the Hawes National Park Centre on 01969 666210 or email hawes@yorkshiredales.org.uk

Want to get in contact with the National Park Authority?

Whatever your interest is in the National Park - visiting, living here, conserving it, running a business here, or more - email yourthoughts@yorkshiredales.org.uk